(Today, I bring to you, “Ebb and Flow”,  a series of short tales that will make you reflect and ponder.  If you like this story and would like to connect with me, please hit the “subscribe” button.)

It was the river’s turn that night. As big, white clouds began to float over us, she began. I listened.

“Durga loved the sounds of the forest. In the village, as shadows darkened and people would lock their doors and latch their windows, Durga would wait. For the faint rustle of the nameless leaf somewhere not far away. The hurried scurrying of a rabbit and the fox as they disappeared into the bushes. The owl that would start to hoot, even as she tried to keep her sleep at bay, the huge Sal tree that breathed easy in her backyard and finally, the occasional deep snore of the beast.

Durga would become restless then. She would open the door lightly and step into the darkness. As she would lower herself lightly on the cement bench, the scents of the forest  would gently envelope her—the woody aroma emanating from across the yonder brook as it mingled with the deep, earthy fragrance of soil, root, pebbles and animal breaths.

But the forest was forest.

And Durga was Durga.

The forest embraced sunshine and raindrops on its naked flesh.

Durga felt the winter’s bite on her soul.

The forest would be privy to the many conversations between bird and beast whereas Durga only had that ancient drum within her. And that too would remain silent on most days.

Durga’s eyes would singe with tears.

She would continue sitting there as though waiting for her inner drum to burst into a rhythm, into a song. So that she could dance her way into the forest and sit by the ancient campfires.

So day after day, she would sit there with longing in her heart.

And then one day when her eyes became heavy with sleep and she was about to go into her house, something caught her eyes. It was as though right in front of her was a path laid down for her. A path illuminated by hundreds and thousands of glittering fireflies– each one flapping its tiny wings and casting light her way. Lightness filled Durga’s entire being.

Durga did not know whether it was the drum in her heart or the music of the fireflies.

But at that moment it did not matter. Durga continued sitting there soaking in the ambiance of it all.

“Thum…thum…thum,” the beats continued to echo in her ears. But now they were just a buzz, a whisper.

Durga rested her head on the pillow.” 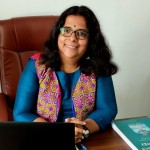